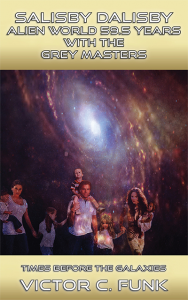 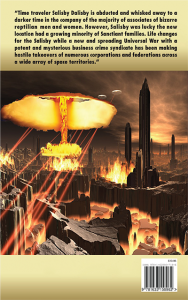 After walking quickly for about one hour, Salisby Dalisby had covered just over thirty-five miles; he could see the city lights were growing brighter as he approached from the south of the city. The new city was raised two hundred feet above the surrounding mud flat area on a lonely large hill that looked to be sixty miles wide.

As Salisby neared the strange new city, he could see an interesting new structure – a tall, white wall that appeared to surround the entire city. As Salisby approached the ten-foot-high wall, he noticed several large gate openings, spaced about three miles apart, each with a road leading through its entrance. There was a unique light emanating from the entire community, much different than what he had seen in the past.

Salisby Dalisby slowed his pace as he passed through one of the attractive gated walkways from the west side of the city and under the large thirty foot high arch over the open gate. Salisby walked to the other side of the tall wall, anxious to see what was on the other side. On a ridge elevated above the rest of the city, he stopped for a moment to rest and view the many homes and strange, tall two-up to-ten-story buildings. He observed only a few people walking up and down walkways, going in and out of several different structures. From where he stood, he could see this large city stretched to the horizon for about thirty miles to where there appeared the same high white wall on the other side. Salisby began keeping pace with the strange men and women walking along with him. He spoke with some of the passersby and inquired for help and directions to another Sanctiant family in the city. Most of the strange people stopped and stared at Salisby Dalisby for a few seconds, silently, and then continued on where they were going. Some turned calmly and went into one of the many different homes that were located near the very organized walkway system of neighborhood homes. There was an explicit communication problem with most of the people on this end of the city, as they did not say anything to Salisby, seemingly unable to understand the language that he was speaking.

After several hours of walking up and down the many walkways, trying unsuccessfully to communicate with the occupants of this large city, Salisby finally approached one of the largest buildings that, luckily, turned out to be the central capitol building. Three of the strange men immediately exited the largest building, walked toward him and began speaking an English language very similar to his own.

The three men who greeted Salisby were: Cukati, Governor of the city, Senator Simeon (the former Governor), and Meekani, the Governor’s assistant. These three different-looking Slutetauk Grey men had familiar Sanctiant names. However, their real names were much different in the Pleki Ploki language and were used when they had regular communications with other military Slutetauks and the corporate leadership.

“Hello, friend. Can we help you?” asked Governor Cukati.

“Yes, I am trying to find a way back to my family that has disappeared, along with my home on the great Plate of Secoram,” explained Salisby.

“Sorry, we do not know of any place called the Plate of Secoram,” said Cukati.