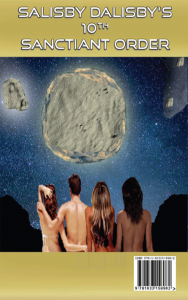 This new prison testing facility was about thirty acres in size and sat just below the top of a high ridge that looked out to the west of the great Plate of Sogor. The huge mountain range was about two thousand miles long with high ridges and canyons that averaged twenty miles apart. There were ninety-five individual high ridge topo lines that were hundred miles or so in length and canyons along the entire west-facing slope to the great Plate of Sogor. The interior mountains at the highest ridges were more than forty thousand feet high. The lowest mountains were fifteen thousand feet high. The elevation of the Templokatisprison was thirty-one thousand feet.On this particular mountain range, there were about three hundred Pulakai military bases and building complexes. Some were built on top of one of the many ridges, and others were located near the bottom of one of the many canyons. The east-facing slope had about two thousand structures and complexes located on one of one hundred five different ridges or canyons.

Before the class 10 Pulakai battle cruiser unloaded the Sanctiant prisoners, the ship had cloaked into the always-lighted PulakaiKusaunt time zone. This particular time zone was still always a lesser lighted time but much cooler than the previous Beelinakitime zone that SalisbyDalisby’s group originally came from.

The ship was quietly positioned about ten feet above the brand new Sanctiant prison facility’s high twenty-four-foot walls. The Pulakai battle cruiser was maneuvered slightly about twenty times over the main holding liquid pool areas below. This process of slight adjustments to get the ship’s hold and special container drop doors lined up with the fluid solution elongated liquid pools below was a very difficult task. The Pulakai commander was having problems with one of the eight door chutes that would not line up with any of the liquid pools below. After ten hours of deliberation and adjustments to the ship’s position, the scientists decided they had no other choice but to risk some of the Sanctiant lighted males’ not surviving the three-story fall into the facility. However, the most important Sanctiant prisoner in the container hold was the lighted Sanctiant Lord SalisbyDalisby. The scientists made sure all of the surrounding escape doors, when opened, would drop perfectly into one of the narrow liquid pools below.

Before the class 10Pulakai battle cruiser unloaded the Sanctiant prisoners, the ship had cloaked into a different time zone that the scientists wanted to hold and experiment with each of the Sanctiant captives. This time zone was similar to one of the Grey Masters’ lighted time zones.

This story continues with the now six-year-old Salisby having been dropped down one of the eight door chutes. The slide from the floor door opening was about one hundred feet long, including two sharp turns on each chute. The chute was made out of a thick glass material that had been polished on the inside of the metal chute. This slide out of the ship ended with a three-story drop into a different Plate of Sogor that had about thirty-eight percent gravity. The high fall out of the stationary ship had been a very exciting event for the young SalisbyDalisby, his brother Tukani, and the other Sanctiant cousins. They had been very bored as captives inside the dark holding container for more than two years. So all of the captive Sanctiants were happy to get out of the strange, dark container and back into a lighted, more open, happier place. None of these Sanctiants had ever dealt with a liquid shower or total submersion bath situation. None had ever been near or seen any type of deep liquid pools before in their past homes. This would be an entirely brand new experience for these once before free Sanctiant brothers.

“Look, everyone. There are some new openings in this floor with light coming into our dark room,” said Sanctiant brother KeeadakaiUztek.

“Let us go and see what is outside on the bottom of this strange room,” said SalisbyDalisbyMukinok.

“Salisby, I want to get out of this room. I hope this opening is big enough to get to the outside,” Tukanisaid.

“Look, there is a very smooth path going down from this opening. I am going down this path. Wow! What a ride,” Salisbyexclaimed.

“Salisby, I am coming right behind you. I think we’ll soon be out of this room. Wow, I am moving faster down this pathway,” Tukaniexclaimed.

“This is fun, going down this fast pathway,” Salisbysaid.

“I am still behind you, Brother Salisby. We are really going fast,” Tukanisaid.

“This path is coming to an end. I do not see anything but light all around now. We are going to fall off the end like the edge of a cliff. Brace yourself, Tukani,” Salisbysaid.

“I am going to drop off the end of this path. Wow! I am free-falling,” Tukanisaid.
TheSanctiant brothers made two separate splashes at the bottom as they sank quickly to the bottom of a strange pool of liquid solution that they had never seen before. They hit the pool about two feet apart. Both swam to the surface, making large splashes, as they had never swum before in any kind of fluid or liquid. All the Sanctiant brothers referred to this liquid solution as stinky juice.

“Tukani, all of our Sanctiant brothers are coming out of that strange place that we were in from above,” Salisbysaid.

“I wonder if that was the bottom of our plate we used to live on and we have been in some kind of cave for a long time,” Tukani wondered.

“Whatever this strange plate is, it is now moving. I still cannot see anything but the bottom of it,” Salisbysaid.

“I can see the end of it now coming closer to us. Wow, that is a huge, strange floating home of some kind,” Tukanisaid.

“It does not look like any plate that I have seen before, and I have made many of them before. That is some kind of huge, floating building with five bright, light-blue lights coming out of its side,” Salisbysaid.

“That huge, miles-long house that we were in is now moving away very fast from us here in this new place,” said KeanamotEadatauk.

“Brothers, that huge building looks to be several miles long, and we were locked up inside for many months. I am glad it is leaving fast and going away,” said ZeedokUketauk.

“That huge floating building is moving very fast away and looks like a very small dot now. Strange that we could not hear any sound as it was moving over our heads and so close,” Tukanisaid.

“I am tired of splashing in this stinky juice. At least we got out of that bad, dark room. I am getting out of this stinky, bad juice,” Salisbysaid.

“Look, all of our brothers are happy again and splashing in this stinky juice. It looks like everyone has come out of that strange, huge place we were in,” Tukanisaid.

“Brother Salisby, let us go over to see if we can help Brother Digipokipok,” Tukanisaid.