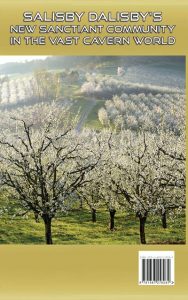 “General Amestead, I am giving you these two latest readings to the other side of the vast cavern. We are still getting close to 90,000 nautical miles as this cavern appears to be very much a very consistent circumference reading and is very round inside this place. Sir, are we making too much noise again with this new laser rangefinder? I know the brass had the engineers use the lowest possible frequency for the laser light beam this time that would have the least amount of sound waves coming from the laser line of sight shot,” Lieutenant Komstok informed the general.

“Lieutenant Komstok, let your commander Upscodd know we can barely hear the laser this time, and the Sanctiants have not shown any sign yet of getting up out of their beds. I want your team to go ahead and take three extra readings to make sure of the circumference of this vast cavern world. That is great news as that verifies this is the largest ever known cavern anywhere in the Universe,” General Amestead instructed the rangefinder team.

The rangefinder team continued with taking more readings in many different directions, mostly to the far west side of the vast cavern area. Soon the rangefinder team had discovered that the Sanctiant community that Salisby was located in was almost directly in the center of the highest distance readings that were about two thousand miles longer than the overall average measurements. They made Salisby’s community the new equator of the vast cavern world.

Lieutenant Komstok, I need you and Lieutenant Upscodd to have your team stop the laser rangefinder for now. We have all of the Sanctiants coming outside again trying to figure out where the strange noise of the laser is coming from. If we need more readings, the next divers’ team can do them later,” General Amestead ordered the rangefinder team.

“General sir, we have plenty of readings to make a very good map of the circumference of this vast cavern area. I think the brass will be pleased with all of the new data that we are sending as we speak; the new data is on its way through the communications system to the surface to be analyzed now,” Lieutenant Kostock reported.

“All divers’ team members that are positioned within three miles of the base camp and are not in view of the Sanctiant community are now ordered to pack up your things and get the hell in here right now to the base camp and make an early inspection of your suits and jet riders just in case we have to leave through the cave tunnel in a hurry,” General Amestead ordered.

SalisbyDalisby had also come outside this time at the request of his dear wife Nora and the other Sanctiant ladies. Even though the new similar noise was only half as loud as before, they all had been hearing the similar sharp humming noise outside their homes again. Even though the divers’ team had been taking several laser readings for about an hour that the laser beams were each within five miles of the homes, the Sanctiants were still awakened by the laser’s lower humming sounds.